Ethereum fails to break out vs. Bitcoin as Treasury yields soar — Will ETH relief rally?

18 Mar Ethereum fails to break out vs. Bitcoin as Treasury yields soar — Will ETH relief rally?

Posted at 15:00h in Uncategorized by 0 Comments
0 Likes 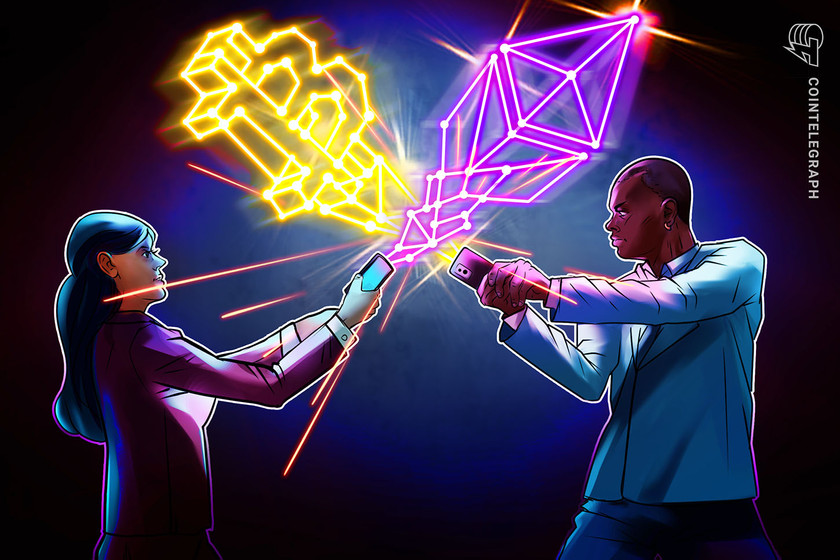 The ETH/BTC pair remains pinned below a key resistance level as the macro landscape worsens.

Ether (ETH), the native cryptocurrency of Ethereum, has failed to break out once more against Bitcoin (BTC) with BTC/USD rallying by more than 8% on March 18.

There are two likely reasons why the ETH/BTC pair is failing to break through an important resistance level.

First, BTC rallied strongly in a short squeeze after the majority of the market was short throughout the past few days, outperforming most alternative cryptocurrencies.

Second, the overall macro landscape for the risk-on market is degrading due to the surging 10-year U.S. Treasury yield, which has just hit a 14-month high of 1.75%. This could place more selling pressure on altcoins that have overall lower volume and liquidity than BTC.

According to the pseudonymous trader known as “Trader XO,” ETH rejected at a key level on the ETH/BTC chart.

The trader emphasized that ETH has to remain above the low support area at 0.029 BTC for the bullish short-term market structure to remain intact.

If ETH recovers from the range lows at around $1,720 on the ETH/USD pair, then it would have a higher probability of seeing a continuation of the rally. He said:

“$ETH – Rejected off the mid as anticipated. Ideally want to see the lows hold here. Wouldn’t mind a deviation of the lows either tbh – would give me more conviction to jump in on #Ethereum Waiting patiently for the structure to shape up before jumping in. More sideways first.”

Despite the stagnation of ETH/BTC, analysts say that the fundamentals and on-chain data points of Ethereum remain highly optimistic.

A pseudonymous Ethereum analyst and investor known as “DCinvestor” noted that the upcoming EIP-1559 proposal and the Proof-of-Staking (PoS) on Ethereum would make ETH more scarce.

These two factors combined with the decreasing ETH reserves across exchanges, as Cointelegraph previously reported, generally paint an optimistic outlook for ETH in the medium term. The analyst noted:

The 10-year U.S. Treasury yield’s momentum is likely the main catalyst behind Bitcoin and ETH’s weakening momentum in the past 12 hours, as the inverse correlation shows in the chart below.

Portfolio managers and strategists have expressed concerns about the overheating bond market and its potentially negative effect on the risk-on market.

“While no response right now is arguably the only move on offer, whatever Powell does at this juncture, the Fed are taking bond markets to the danger zone. If they don’t do anything the bond market will continue pushing yields higher looking for the Fed to increase or adjust bond-buying while if he does act now then he will be accused of overstimulating and running too hot.”

Bitcoin, Ethereum, and the rest of the crypto market could decouple from the risk-on market and equities. But, ideally, the U.S. Treasury yield should stabilize for the crypto market to see a sustainable uptrend in the near term.