The US has already lost the 2020 crypto regulation race to Europe
2562
post-template-default,single,single-post,postid-2562,single-format-standard,bridge-core-2.3.7,ajax_fade,page_not_loaded,,qode_grid_1300,footer_responsive_adv,qode-content-sidebar-responsive,qode-theme-ver-22.3,qode-theme-bridge,disabled_footer_bottom,qode_header_in_grid,wpb-js-composer js-comp-ver-6.2.0,vc_responsive,elementor-default,elementor-kit-199

Posted at 08:43h in Uncategorized by 0 Comments
0 Likes 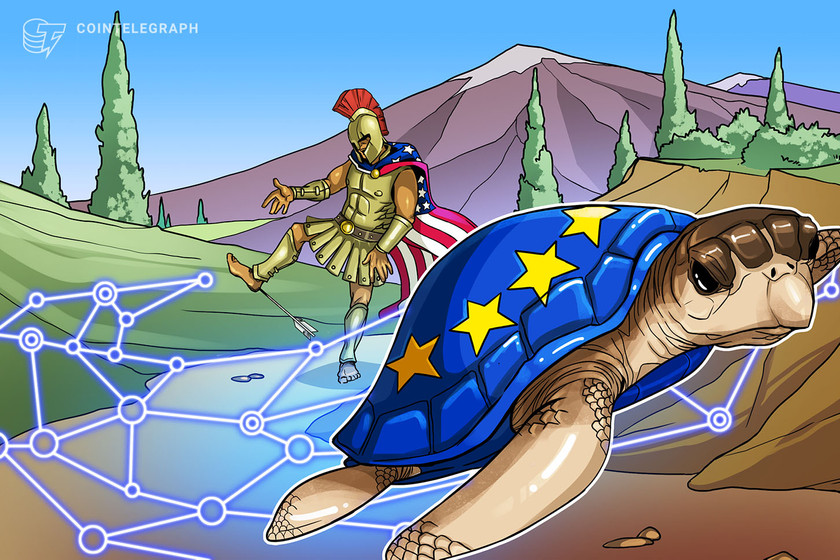 When it comes to crypto regulation, the United States is falling further behind more progressive and visionary nations.

2020 has been a stellar year for the crypto economy, with more enterprises and institutions than ever before implementing the technology. Big announcements, such as PayPal’s decision to enable its users to buy and sell Bitcoin (BTC), have understandably dominated the headlines. However, pivotal regulatory developments across the globe have largely flown under the radar and arguably present even greater significance for crypto in the long term.

The importance of clear regulatory frameworks cannot be overstated, with patchy and insufficient legislation offering a major barrier to enterprises looking to digital assets and distributed ledger technology. It is clear now that a number of jurisdictions in the European Union and Southeast Asia are leading the regulatory race, with clear taxonomies for digital assets in place — while the United States continues to play catch up.

A key European-wide development in 2020 has been the EU’s proposal for a common framework legislating for crypto assets across the 27 member states. The regulation on Markets in Crypto Assets, or MiCA, aims to provide legal certainty around the definitions of a number of types of digital assets and associated services, with a pilot regime for DLT market infrastructures due to take place soon.

Related: Chasing the hottest trends in crypto, the EU works to rein in stablecoins and DeFi

A number of European states are even further ahead, with Germany proving to be one of the most progressive states in the European Union. As of January 2020, the custody of crypto assets has been integrated into the German Banking Act as a regulated financial service that requires a dedicated license by Germany’s Federal Financial Supervisory Authority. As a result, many financial institutions are in advanced stages of their roadmap on a digital asset offering, and more than 40 institutions have expressed interest in applying for a custody license.

In August 2020, the German ministry of finance published a draft bill on electronic securities. This bill enables the issuance of digital bearer bonds on a DLT infrastructure without the requirement of a paper-based certificate and introduces the definition and regulated financial service of a decentralized securities register. The law is expected to be passed as early as in the second quarter of 2021, representing another significant step toward a comprehensive framework for digital assets in the country.

Switzerland has established itself as a crypto-friendly state, offering clear guidance on digital assets from an early stage in the life cycle of the technology. In September, Swiss parliamentarians voted to pass a wide-ranging set of financial and corporate law reforms around DLT technology. These laws, which are likely to come into effect early next year, will further open the doors to the adoption of digital assets in the country, as they update legislation regarding the trading of digital securities, the segregation of crypto-based assets in the event of bankruptcy, and create a new authorization category for “DLT trading facilities” (crypto exchanges).

Related: A guide to setting up a crypto business in Switzerland

Other European jurisdictions have also presented strong legal frameworks for the regulation of digital assets, with Liechtenstein breaking new ground in reportedly being the first country in Europe to bring into law an entirely new and comprehensive framework for the regulation of blockchain, digital ledger technology and tokens. The Law on Tokens and Trusted Technology Service Providers, which came into effect on Jan. 1, 2020, offers an innovative method for regulating blockchain technologies, which rather than integrating blockchain and digital assets into existing legal frameworks, allows for any right or asset to be packaged into a token, according to the Token Container Model.

In contrast to the clear legal frameworks adopted across Europe, the U.S., the global financial leader, remains a notable laggard in the provision of comprehensive crypto regulations. This divergence is already having a noticeable impact on the adoption of digital asset capabilities by institutions, with an acceleration in roadmaps taking place among institutions in jurisdictions where a clear licensing regime is in place. Tier one and tier two banks, such as Standard Chartered, BBVA and Gazprombank Switzerland, among others, have all publicly announced crypto custody offerings in recent months, and it is becoming clear that European banks have the potential to emerge as the preeminent global crypto leaders.

This trend is not going unnoticed by the U.S. banks that currently dominate global markets. Once U.S. regulators align and provide their banking sector with clear guidance, the market is also likely to see explosive growth in the United States. U.S. regulators have taken the first steps toward such clarity this year with Congress introducing the Crypto-Currency Act of 2020 in March, which provided some legal certainty in terms of defining types of digital assets and which regulatory body would be responsible for supervision.

Related: The US SEC amendments and SAFT process

In terms of digital asset custody, a major step forward took place in July, with the Office of the Comptroller of the Currency issuing a letter that authorized any regulated financial institution to provide cryptocurrency custody services, once appropriate risk management processes and controls were in place.

However, other U.S. regulatory bodies have remained largely silent, seemingly content to cede ground to jurisdictions in Europe and Asia. At the same time, rumors of regulatory measures, such as the ban of non-custodial wallets by the U.S. Treasury and the introduction of the Stable Act, which seeks to make stablecoins illegal without approvals from relevant government bodies, create a rather restrictive environment for digital assets.

If this lack of drive for constructive regulation and concrete guidance at the federal level remains, it will be interesting to see if individual states make moves toward legislating for digital assets at a local level. For example, the move by San Francisco-based crypto exchange Kraken to transition into the regulated space by acquiring a banking license in the state of Wyoming represents an interesting precursor of what may come next if federal authorities do not make regulatory strides and quickly.

While the signs are increasingly clear that U.S. regulators are waking up to the danger of getting left behind in the race for digital asset supremacy, it is becoming clearer and clearer that such a battle may already be lost, at least for this year.

The views, thoughts and opinions expressed here are the author’s alone and do not necessarily reflect or represent the views and opinions of Cointelegraph.

Johannes Kaske is director of sales and business development at Metaco, where he is responsible for leading the strategy and implementation of Metaco’s sales operations across Germany. Prior to joining Metaco, he worked for the Bavarian State Ministry for Digital Affairs, where he was responsible for the state government’s blockchain strategy and led the Bavarian Center for Blockchain. Johannes graduated from ESADE Business School in Barcelona with a Master of Science in international management.